This quarter, I am taking just one class: memoir writing.  In it, we were instructed to choose a photograph—any photograph—which we are to later write a reflective essay on.  Instantly, I thought of this photo: 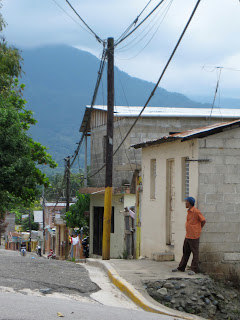 One of my favorite snapshots of our time in the Dominican Republic, this picture captures a lot of things for me: the peacefulness and reflectiveness of travel, the life of the rural Dominicans, the poverty that sneaks up on you as a traveler, waiting around corners and in between buildings, ready to expose itself when you least expect it.  But most of all, this image captures a moment in time, a place I loved, and an adventure I won’t soon forget.

Jarabacoa, where the photo was taken, is a rural mountain town known for its crops: strawberries, coffee, and peppers, as well as its flowers.  It’s a beautiful little place with a nonexistent nightlife, not much in the way of tourism, and definitely little to offer the spoiled traveler who came to the DR for the beaches and five-star resorts; but to us, it was a favorite spot, just a two-hour bus ride away.

It’s also the place where some pretty crazy things happened: the bat that got stuck in our room and dive-bombed me while I was sitting in bed; the hour-long horse ride through the mud and muck of the jungle, during which my husband and friend complained most of the time (but I really enjoyed); the waterfall excursions and swimming in the pools below; drinking beer in el parque, pretending not to feel out of place as the only gringos there; eating at the same restaurant three times because we couldn’t find anywhere else; the final trip with a dear friend of mine in the DR, before we parted ways.  These are the things I love about my travels to Jarabacoa, the things I’ll reminisce about for years to come.

And while I was looking for the above picture, I came across this one: 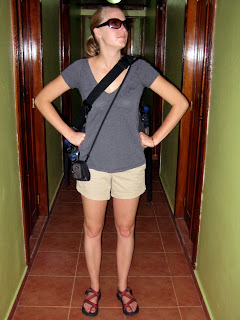 I call this my “explorer pose,” because I, well, was trying to look like a traveler/explorer.  To me, this photo, while posed and a bit forced, shows a great deal about me as a person and how I changed in 2009.

Case in point: Doug loves to tell the story of how, shortly after we started dating, I said something like, “Oh, yeah, I don’t stay in hotels less than four stars.”  At the time, I think Doug just looked at me strangely, not wanting to offend his new girlfriend; later, he told me—and anyone else who would listen—how silly he thought I was for saying such a thing.  (I admit, it was a bit silly.)  But just a little over a year after that statement, here I am, clad in my explorer outfit, living in a new-to-me third-world country, wearing Chacos and my Timbuk2 bag, ready to tackle some adventures.  This is after riding a bumpy bus through winding mountain roads (which, I later learned, is a super deadly and dangerous road), checking into a MUCH less than four-star hotel, and eating some questionable food at a local joint across the street.

Well, for starters, it can be the year I realized a lifelong goal: writing a book.  But what else?  How will I grow personally, professionally, and spiritually?  How will I find adventure when I’m stuck here in the U.S., not traveling, and not immersing myself in new cultures?  Reaching a lifelong goal isn’t enough for me this year; I need to do something big, to keep up with the tradition of years past.

But, really, you can’t plan these things.  All you can do is take the opportunities life offers, go with the flow, and try to enjoy it.

I guess I’ll just have to let life be what it is and see where it takes me.  As the Dominicans say, “A ver…”

If you know writing a book will help you step into your potential, but you’re just not sure how to take the first step, read on.

HOW TO TURN YOUR EXPERTISE, IDEA, OR STORY INTO A SUCCESSFUL BOOK